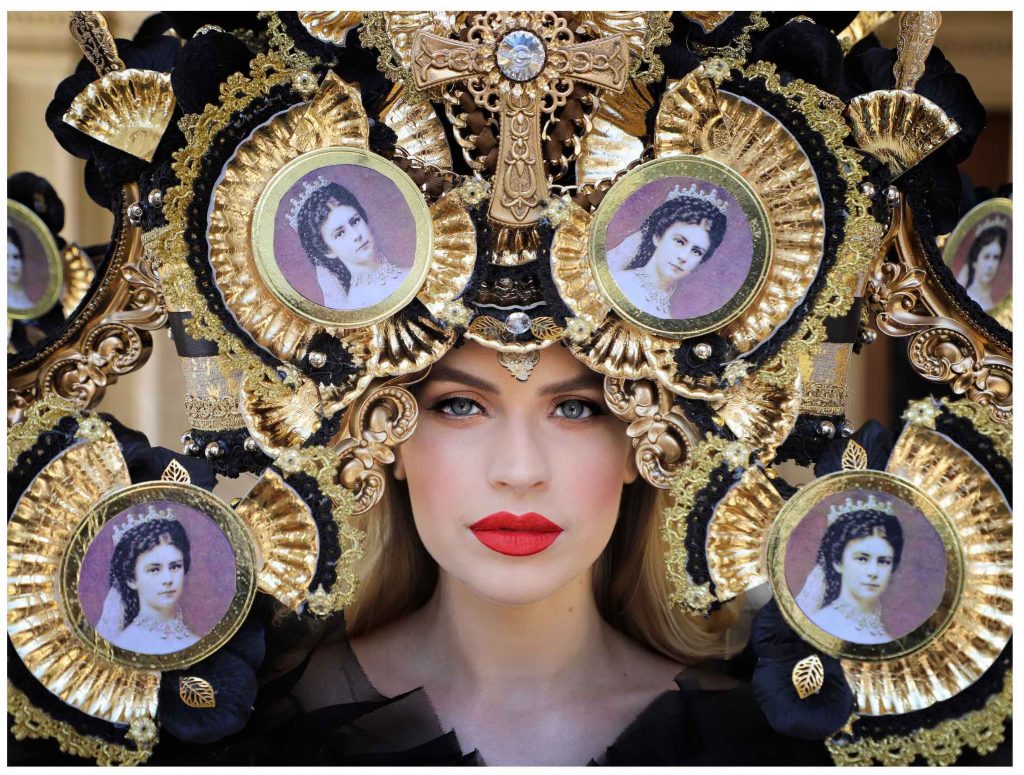 The new worldwide project “THE CROWNS Imperial Heads” was presented in collaboration with the Serbian stylist Niko Zivanovic, Creative Director of the Niko Niko brand.

On Monday 27 March, at the Hotel Bistrol – Luxury Collection Hotel in Vienna, the International Project was held inside the sumptuous suite of the noble palace that hosted the Italian design Giuseppe Fata, who presented the new global project called “THE CROWNS” Imperial Heads.

The project was born in collaboration with the Serbian international designer Niko Niko who embraced the idea of ​​the project. The well-known stylist linked to Fata by a deep friendship and professional esteem has created and created garments of extraordinary beauty and unique refinement. All to embellish the Head Sculpture created and created for the occasion and to pay homage to the Empress of Austria Elisabeth Amalia Eugenia of Wittelsbach known as “Sissi”.

Special Ambassador of the project is Prince Kevin Nyerere, grandson of the blessed president of Tanzania. A tribute to the history of the rulers of the many kingdoms of a lived era. Through this project, Fairy creates crowned heads that become works of art, unique pieces that trace the history of the various empires of the past.

The opera was also staged at the Opera House.
The Crown: This precious object is a symbol of prestige, respect, fame, incalculable value and great beauty. All of these characteristics tend to merge with each other. Something immensely beautiful seduces and seduction is a form of control, of power.
Since the Holy Roman Empire, in Christian countries, the crown symbolizes the power conferred by God. It is no coincidence that most of the crowns of the kings of Europe are surmounted by a cross.

The world of fashion and art have begun to get to know the Italian artist thanks to the apocalyptic creativity of a form of art on the head that is unique in the world. For years now, connoisseurs of art and fashion have considered Giuseppe Fata one of the most significant authors of the contemporary international fashion scene for the vision of him in conceiving headgear that are true works of art, of great social, emotional and existential.

Giuseppe Fata himself concludes: the City of Vienna has always been an important half for my cultural vision, for the history of the Austro-Hungarian Empire, for the architectural structures that have always spurred my artistic inspirations. Having shared this new project with the stylist Niko Niko is for me an important artistic union, a deep friendship that binds our arts beautifully.

Credits – Model Sara Martorana of the “Top Fashion Model” agency led by Dr. Carmen Martorana Event.
Make up was conceived and created by the skilled hands of Dario Caminiti of BCM in Milan. All immortalized by the author’s shots by photographers Max Ruvio and Francesco De Tullio. Television footage by the videomaker Kekko Di Michele.