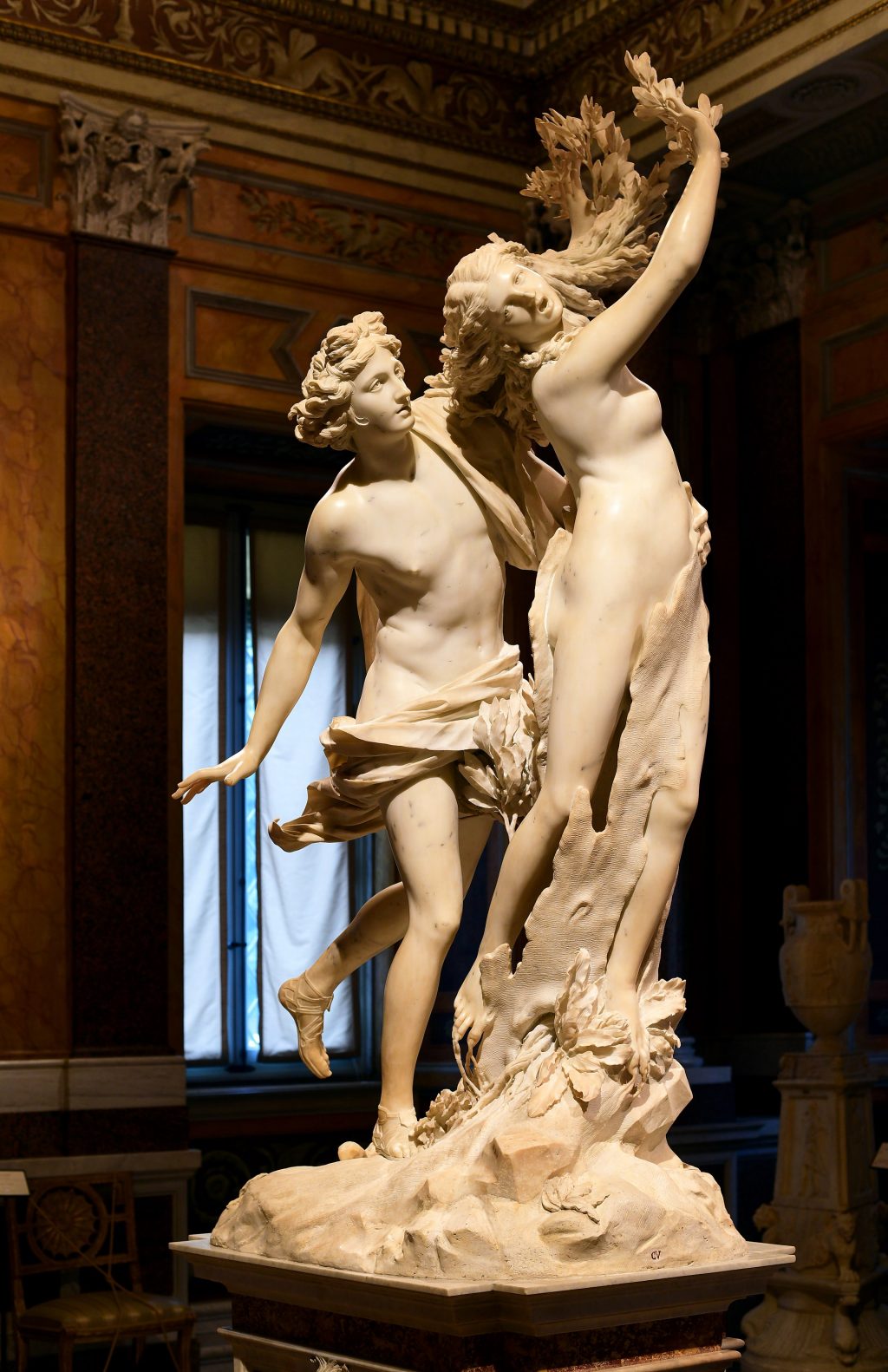 Gian Lorenzo Bernini is considered to be one of the greatest artists of the Baroque era. His training took place under the supervision of his father Pietro who taught him the fundamentals of sculpture.

Gian Lorenzo’s works are characterized by a particular dynamism thanks to the techniques that the author used to sculpt.

In particular, for this work, the sculptor used Carrara marble, extracted from the inside of the quarry which was much easier to model.

Through a delicate work of drill he gave shape to the fingers and toes that are transformed into leaves and roots and the strands of hair in motion. He also used a step chisel, in this case to finish the bark, the sander to rough out the block, files and rasps to scrape the surfaces which he then smoothed with abrasives of various kinds such as pumice stone. His refined technique made it possible to depict the signs of metamorphosis in the marble in the smallest details.

The work depicts Apollo and Daphne and the latter’s metamorphosis into a laurel tree as suggested by its name in Greek: daphne – laurel. The scene represents the end of the race where the God Apollo manages to reach the nymph Daphne, but it was at the first contact that the metamorphosis took place.

The god depicted as a boy has tense muscles, out of breath from running and desire, leaning on his right leg, he seems to be losing his balance while touching the nymph’s body with his right hand.

Daphne arches her body to try to escape from her pursuer and screams because she is aware of what can happen but her hair and her fingers are starting to turn into roots and leaves as her legs in the trunk.

This theme was not new in the world of art but it had never been addressed by sculptors.

Gian Lorenzo Bernini takes inspiration from Ovid who in the text “Metamorphosis” tells of Apollo who after a quarrel with Cupid was hit by the latter with an arrow with a golden tip which brought love and but also caused an uncontrollable passion towards the nymph Daphne who in turn had been hit, by the archer himself, by a lead-tipped arrow that warded off her love. Ovid narrates that during the pursuit of her, the nymph, to protect himself, begged her father, the river god Peneus to save her, so that he transformed her into a laurel tree as soon as the first contact between the two.

The Apollo and Daphne sculpture was commissioned from Bernini by Cardinal Scipione Caffarelli-Borghese. The work is kept in the Borghese Gallery in Rome.