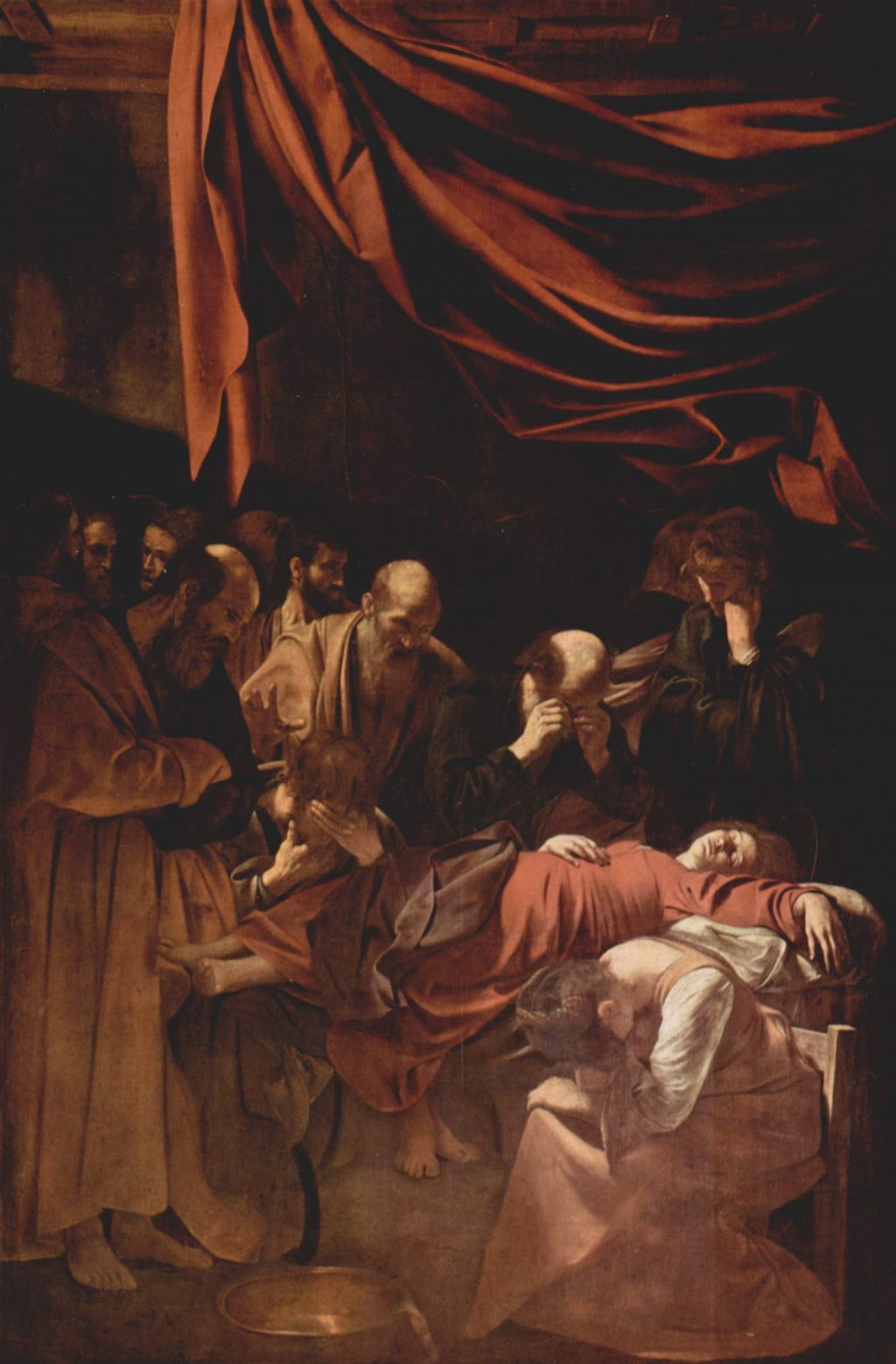 Death of the Virgin by Caravaggio, edited by Alessio Fucile Critic and Art Historian

I present to you “Death of the Virgin” by Caravaggio, painted around 1605: it has always been considered the canvas of the scandal as it was rejected by the Church, removed from the altar for which it was painted and even sold and transported abroad. Today it is housed in the Louvre Museum in Paris.
The painting was commissioned by a close friend of Cardinal Del Monte to adorn a funerary chapel in Santa Maria della Scala in Rome. The episode, drawn from the apocryphal tradition, attests how the angel Gabriel had revealed his imminent death to Mary by handing her a palm branch. Meanwhile, the apostles, scattered to proclaim the Gospel to the world, are miraculously transported to the house of the Virgin in Jerusalem and while preparing the funeral they receive a visit from Jesus who leads the soul of the Mother to heaven. During the funeral procession directed to the tomb on Gethsemane, a Jew would like to profane the body of Mary but is punished and his hands fall: he is told that he will be healed only if he confesses the divinity of Jesus and so it happens. The apostles watch over the body of the Virgin at the tomb, which Jesus and the angels carry to heaven on the third day.
In the canvas, Caravaggio represents Maria’s house; the Virgin lies on her deathbed, without any sacred attribute; a red curtain, which is part of the makeshift canopy to create some privacy and to block the view of the dying woman, is forcefully moved by an apostle.
Merisi imagines the scene charged with the modesty of the apostles, represented as commoners and without a halo, who do not enter that place before the body has been reassembled. All are barefoot and in simple clothes, a tunic and a cloak to shelter from the elements. Giovanni is standing on the right, wrapped in a green cloak, with a pensive and absorbed face, leaning on his left hand; behind her appears the apostle who moves the curtain so that everyone can finally see the Mother of Christ and be able to greet her one last time. Standing at the foot of the improvised bier is Pietro, who bows his head in greeting and, frowning, humbly raises his eyes to his Lord’s mother, hugging himself with folded arms in a gesture of dignified pain. It seems that Caravaggio is alluding to Pietro’s character: he does not give in to tears and, enduring the pain, he curls up in himself to strengthen himself and others, aware of his role in the group, together again in that sad moment. Just behind there are three apostles who, having not yet seen the body of Mary, talk to each other while a fourth is called to attention by the apostle who moves the curtain.
The girl crying on the chair remembers, both in the dress and in the hairstyle, the character of another Caravaggio painting, the Magdalene. Perhaps she washed the body of the Virgin, in fact a copper basin is on the ground with a dangling gauze. Maria, lifeless on the wrought iron bed, has her left arm stretched out on the foreshortened mattress, to identify a cross, the same one on which she saw her Son die, and her right hand resting on her belly, the place where she conceived and welcomed the Savior. The Virgin, portrayed young, represents the immortal Church, while her swollen belly recalls the divine grace of which she is pregnant. Caravaggio recalls that through that body God entered history to save man. The criticisms are raging precisely on this particular: painting considered “lascivious” and “without decorum”, has led many to think that Caravaggio had portrayed a dead prostitute drowned in the Tiber. Much scandal, in particular, made bare feet up to the ankle.
Personally, it seems clear to me that Caravaggio wanted to paint a pregnant woman, and the term “swollen”, used by Bellori, alludes to this, according to popular usage. The holiness of Mary proceeds from being her “mother”: once again Caravaggio summarizes and renews the iconographic tradition that precedes him.
In the instant in which the curtain is moved, a ray of light bursts from above and fills the small room with a golden glow: it is the light of grace that shines in the darkness where there is the smell of death, a metaphor of the heart that often it is a dark receptacle for errors and failures. Caravaggio with that ray of light invites you not to be afraid of your weakness! Because if you want it, it is in your frailty and in your wounds that you will discover the presence of God. Thanks for your kind attention.