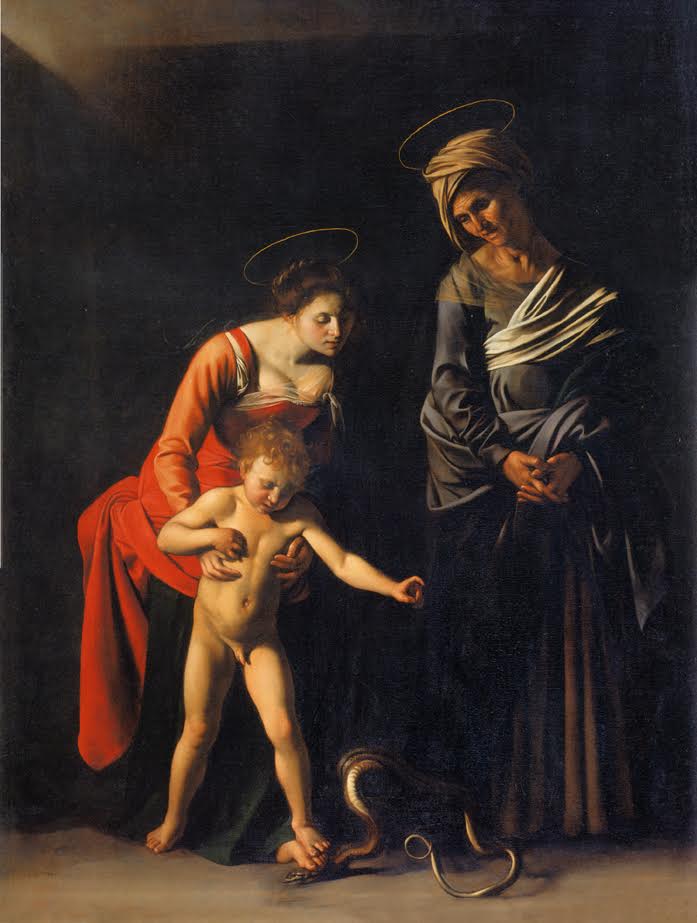 The Madonna dei Palafrenieri by Michelangelo Merisi, edited by Alessio Fucile Critic and historian of art

Today I introduce you to Michelangelo Merisi, known as Caravaggio, from 1606, today in the Galleria Borghese in Rome.
The canvas, also called “Madonna della Serpe”, was commissioned by the Archconfraternity of the Palafrenieri, the pontifical chairmen, and was intended for the altar of their chapel in St. Peter’s Basilica. However, he remained in his seat for only a few days. According to Bellori, the art of Caravaggio could not have followed because it was corrupt and not beautiful, and in his opinion the episodes of removal of his paintings would be the most evident demonstration of this. Add to this that due to the killing of Ranuccio Tomassoni, with the consequent arrest warrant against Caravaggio, it was considered inappropriate to place the painting in the Vatican Basilica. Furthermore, Cardinal Scipione Borghese’s eagerness for collecting who, having already many paintings by Caravaggio, believed that this could be the last of the great artist, now condemned to death, and thought to take possession of it. In addition, the painting was rejected by the Confraternity because it presented little digestible aspects: the naked and overgrown Child held by a madonna-commoner who bends down showing her chest and with a face well known in Rome, that of the model and friend of the painter Maddalena Antognetti called Lena. Finally, the detached and resigned attitude of San’Anna, mistress of the Palafrenieri.
The canvas depicts the passage from Genesis, in which God addresses the serpent with these words: “I will put enmity between you and the woman, between your offspring and her offspring: this will crush your head and you will sneak into her heel” . Pope Pius V in a document expressed himself thus: “The Virgin crushed the head of the serpent with the help of the Son”. Caravaggio demonstrates this concept with his powerful icasticity. Anna is present in a contemplative and inactive attitude, detached, her presence is exclusively in function of Mary, who will be the parent of God.
The scene is immersed in almost total darkness, it represents the existence of man here and now. A ray of light at the top indicates the possibility of salvation that is offered by God. With Jesus and Mary you can overcome the darkness that surrounds you and that you often even discover within yourself.
Evil appears creeping, insidious, slimy, in the shape of a snake. Isn’t that exactly how man lives with evil? An evil that is not always seen but that is close, next, and that crawls right between our legs. Caravaggio to represent the snake, always attentive to reality, was inspired by a cervone. Anna, on the right, represents every man. She has folded hands, slightly disgusted expression, she contemplates evil with horror, but without being able to really distance herself from it. How many times do you notice the evil but at the same time you are seduced by it, you know that it causes you sorrow but you cannot avoid it. It is the experience of Eve who knows God’s prohibition to eat the fruit of the tree of the knowledge of good and evil but at the same time “she saw that the tree was good to eat, pleasing to the eye and desirable” and for this reason it does not resist the suggestion of the snake and eats it. She still observes this detail: the Child with the middle and thumb of his left hand draws a perfect circle. Under the snake he could describe a perfect circle if it were united but it is broken. Evil cannot be perfection but good, which is identified with Jesus.
Maria is presented by Caravaggio as the new Eve and Jesus as the new Adam, the ancient enmity between the woman and the serpent is expressed in the crushing of the latter’s head. Maria, a popular woman, with a proud look and overwhelming beauty, with a peremptory facial expression, she decides, works, she knows how to do it. She takes the Child under the armpits, supports him and pushes her foot on the snake’s head to crush him. The Child imitates her and places his foot on her.
The dark zone determines the cubic space of the room in which the representation takes place. It seems that Mary and Jesus take a step towards the light which, investing them fully, reveals them, bringing a further sense of revelation that makes clear the whole path of salvation in history. The door that can be glimpsed on the left is the ancient door of the garden of Eden, through which Adam and Eve were driven out, but where man is brought back thanks to the infinite mercy of God, who has preserved the Virgin for to give his Son Jesus to the world. Thank you for your attention.