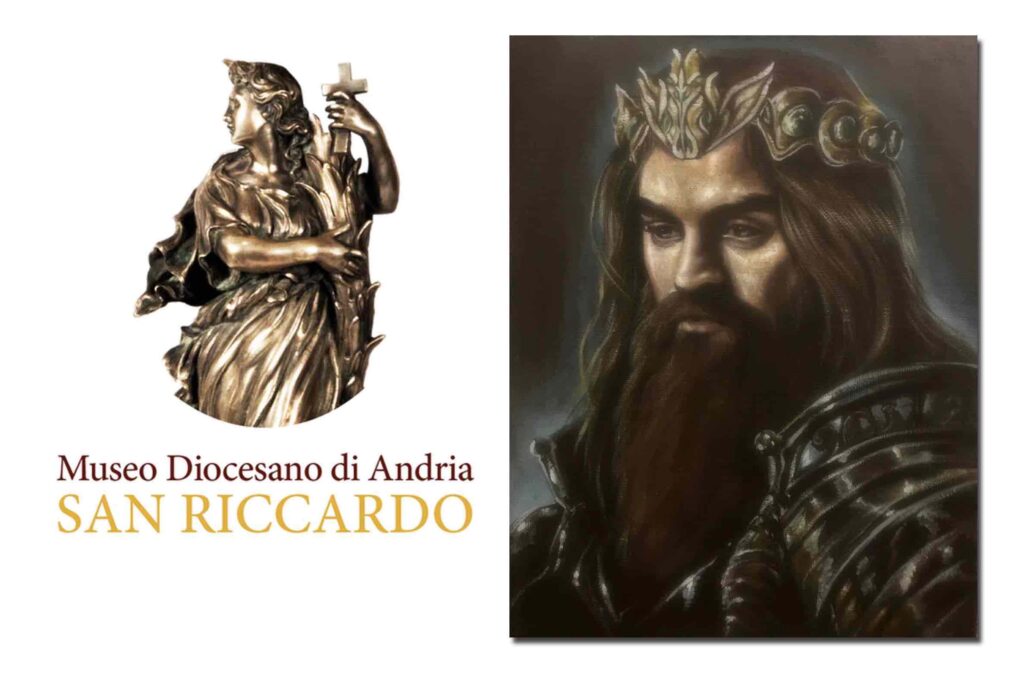 On 23 July 2021, the painter, Founder of the Stilnovista Art Movement, Carmelo Fabio D'Antoni, officially joins the historical path of the San Riccardo di Andria Diocesan Museum with a work specially created on the great Frederick II of Swabia - Stupor Mundi .

For this occasion, D 'Antoni created an image of Frederick II in his full splendor on jute canvas with eighteenth-century techniques, depicting him with an armor still defender of that art and culture he loved so much.

The work will be permanently visible within the museum itinerary dedicated to contemporary works, in relation to the opening hours and reservations prepared by the institution.

The Director of the Diocesan Museum of Andria Don Giannicola Agresti said: "D’Antoni's work enriches the collection of the Diocesan Museum of Andria. The author, with the portrait of Frederick II of Swabia, highlights his artistic sensitivity in representing the features of the Emperor, through a current reinterpretation of the historical figure "

Sicily, the land of culture and domination, of blood and fire, of passion and suffering, has always hosted exceptional talents. D 'Antoni matures his artistic vein in the precious context of his land, feeding on centuries of history and culture present here. Multifaceted by definition, he grows up in the workshops of the greatest contemporary masters, experimenting with techniques and styles that have led him to find his path in the sublimation of the female figure. In 2017 he approaches the Supreme Poet Dante Alighieri, creating works inspired by the Divine Comedy. The artist thus approaches the literary thought "Stilnovista", and decides to resume its philosophy by founding a pictorial current. His personal growth, troubled and suffered, led him to conquer, despite his young age, the highest levels. History will always remember him as the man who went down to hell passing through the 4 elements until he reached his highest stature as "Painter of the Dolce Stil Novo". His is the coined phrase "The highest expression of art is the strength of the Woman". The Artist has grasped the spiritual value of the strength of true love, the woman, sublimating it in her canvases. A sensitive and respectful man, always characterized by an elevated spirit, D 'Antoni knows how to grasp the beauty in the strong and bright expressions of the seductive and bewitching eyes, but never vulgar of his subjects, which he transforms into mythological and historical women. From Greece to Scandinavia, passing through Europe and England, the artist transforms his models, sometimes out of his vivid imagination, into immortal warriors, alive and sacred, ethereal guardians of his always precise and disciplined trait. .

The Diocesan Museum dedicated to San Riccardo, Bishop and Patron of the city of Andria, is located in the heart of the historic center, a short distance from the Cathedral Church where the sacred relics are venerated.

The rich patrimony of works of the Diocese of Andria, collected by the Bishop Mons. Giuseppe Lanave, finds space in the large and bright rooms of the Museum, established by the latter on 20 May 1972. On the initiative of the Bishop Mons. of restoration has redeveloped the building - formerly the residence of the noble Margiotta family and later seat of the community of Laborers - in a modern museum structure on three levels. Under the episcopate of Mons. Luigi Mansi, on 23 April 2019, on the occasion of the 581st anniversary of the discovery of the relics of the patron saint, the Museum was inaugurated.

An itinerary articulated according to a chronological path leads the visitor into the history of the city and its Diocese, through a substantial heritage of works - paintings, stone and wooden sculptures, silverware, sacred vestments and other objects - which helps to define the history of art in Puglia from the Middle Ages to the twentieth century.

FROM THE TWO CENTURY TO THE FOURTH CENTURY

The first section contains some important works of the regional artistic culture. The thirteenth-century icon, known by the name of Madonna d'Andria, attests to the centrality of the city in the circulation of phenomena related to worship and culture in the Mediterranean. The marble bust depicting Francesco II Del Balzo, Duke of Andria and lord of a southern Renaissance of great vitality, debated between the sculptors Francesco Laurana and Domenico Gagini, and the refined compartments of the polyptych painted by Antonio Vivarini, a sign of a relationship between Puglia and Venice at the end of the fifteenth century, they are among the most precious pieces of the collection.

FROM THE 16TH CENTURY TO THE 19th CENTURY

Large-format paintings, wooden sculptures, sometimes preserved in fragments, constitute the main nucleus of the second section of the Museum. It is a precious testimony of art and faith of religious orders and brotherhoods, in the wake of a renewed sensitivity suggested by the Counter-Reformation, and of the growing role of the modern city bourgeoisie in the commissioning of sacred works. The melancholy Magdalene by Cesare Fracanzano and the Volto Santo of Flemish sensibility give prestige to the section.

THE ACTION OF THE BISHOPS

The objects in the third section attest to the commissioning of the Bishops of the Diocese between the nineteenth and twentieth centuries to give solemnity to liturgical celebrations. Among sacred vestments, precious pontifical copes, silver and reliquaries, shines the precious Stauroteca which houses one of the fragments of the True Cross.

An obvious common thread between Sicily and Puglia, two lands linked by the love of the Great Emperor Frederick II of Swabia - Stupor Mundi.

The man who with culture, and not with weapons, was able to conquer the world and unite peoples.