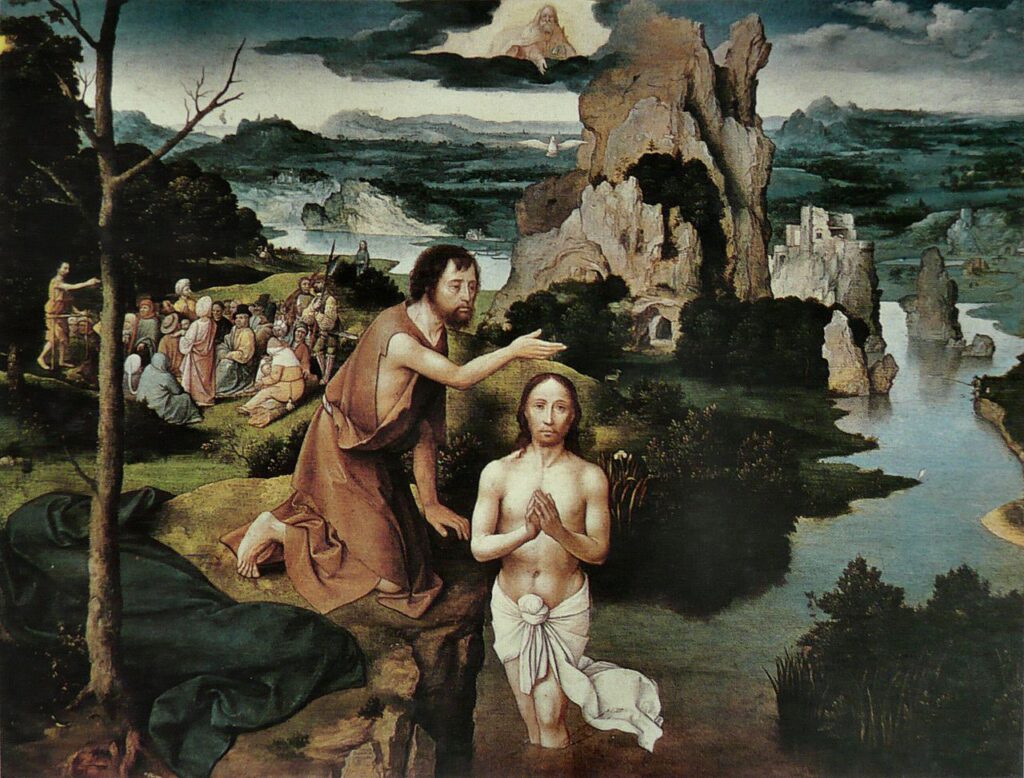 Welcome to a new journey to discover art. I present to you the "Baptism of Christ" by Joachim Patinir, from 1515, preserved in the Kunsthistorisches Museum in Vienna.
The Jordan River, the location where the event takes place, meanders between jagged banks and rocks, contained by green banks. The grandiose path of water is a symbol of the Baptist's vocation, sent to prepare the way of the Lord and to straighten his ways. John "wore a camel-hair dress and a leather belt around his hips." The artist renders this idea by representing him poorly dressed, in the manner of beggars.
On the left side, John preaches to the crowd and points to the small figure of Jesus in the distance: "Behold the Lamb of God, he who takes away the sin of the world". Some of the listeners turn in the direction of the Savior.
In the foreground, Jesus receives Baptism from the hands of the Baptist who pours water while remaining on his knees, recognizes that he is standing in front of him "the one to whom I am not worthy to bring him sandals". The reverential attitude is also related to Jesus in prayer and manifests the sublime moment that Luke expresses as follows: "While Jesus, having also received baptism, was in prayer, heaven opened and the Holy Spirit descended on him in appearance of dove and there was a voice from heaven: "You are my beloved son, in you I am well pleased." "All details represented by Patinier. The Father appears in the clouds and sends the Holy Spirit in the form of a dove and pointing to Jesus fa hear: "You are my beloved son." This phrase has made itself heard and is also true for you. If you are not aware of this truth you will always end up being petulant and complaining. You often repeat to yourself: "I am the son beloved! the son in whom God is pleased, I exist not by chance but because I am a thought of God, the fact that I woke up this morning is proof that God is still looking at me, He loves me while I was sleeping. "When you feel depressed , fragile, repeat: «I am a beloved child of the father". It will be your antidepressant, a stimulus to move forward, face every trial and fight a danger that is always on the alert: pessimism. Discouragement is one of the most subtle temptations, weeds that stifle the good. Get used to taking apart the pessimistic frames you discover in yourself. In every negative thing there is always a positive side on which you can build. Seize the good that exists to enhance it and leave aside the evil on which you cannot build anything. Look for beauty even in what appears less beautiful.
In the painting there is perfect axiality along the central line, signifying the unity between the three divine persons. Jesus did not need Baptism, however he wants to submit, to be fully in solidarity with the sinful man. Paul writes in this regard: "He who had known no sin, God made him sin in our favor". It means that God treated Jesus as if he were the greatest sinner in this world. As if he were sin himself. And it is precisely for this reason that Jesus paid on the cross in place of all men. "The Lord made the iniquity of us all fall upon him," said the prophet Isaiah.
This is also evidenced by the blue color of the robe that Jesus left on the shore. It is the color of divinity. As Paul Jesus remembers, “although he was of a divine nature, he did not consider his equality with God a jealous treasure; but he stripped himself, assuming the condition of a servant and becoming like men; appeared in human form, he humiliated himself by making himself obedient to death and death on the cross ».
Extraordinary is the landscape and the surrounding nature that is the backdrop to Baptism. It degrades towards the horizon and remembers that something new is happening. The sacrifice of Jesus, of which Baptism is the image, introduces us into divine life. Earthly, physical life is a great thing, but it is not everything, there is something that transcends and contributes to giving meaning to earthly existence. Are you aware of this greatness to which you are called? Do you sometimes think about the great treasure you carry inside?