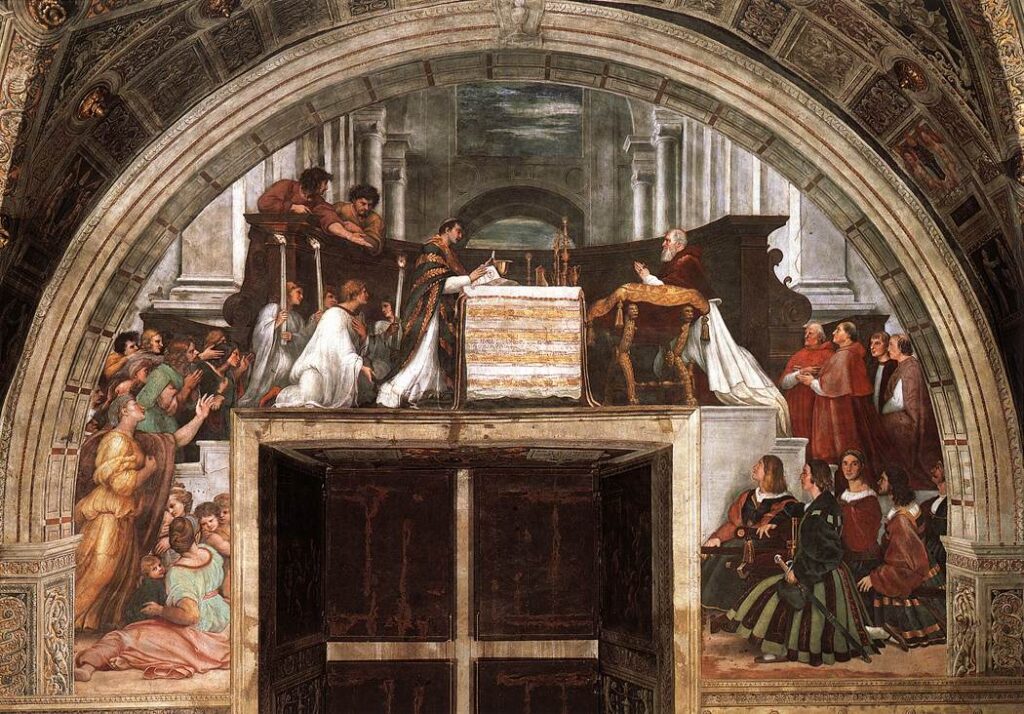 Welcome. Today we contemplate together the "Mass of Bolsena", frescoed by Raffaello Sanzio in 1512 in the Room of Eliodoro in the Vatican.
The event tells of a Bohemian priest, Peter of Prague, who, doubting the real presence of Jesus in the Eucharist, wanted to go to Rome on a pilgrimage to appease his inner torment. Before reaching his destination he stopped in Bolsena, and asked to celebrate mass in the grotto of Santa Cristina. At the moment of breaking the host, blood began to gush from that bread, impregnating the corporal and the vestments of the priest, and some drops even falling on the floor. The priest tried to hide what had happened, but to no avail. The faithful present saw and cried out to the miracle. The corporal was brought to Orvieto, where Pope Urban IV then resided. These to remember the miracle instituted the feast of Corpus Domini. The texts for the feast were prepared by St. Thomas Aquinas. The Cathedral of Orvieto was built to preserve the corporal, the facade follows the shape of the reliquary that preserves it.
The prodigious event confirmed the wavering faith of the priest: Jesus, truly present in the consecrated bread and wine, confirms his promise: "I am with you always until the end of the world".
Raphael represented the event with ingenious skill. He used the window obstruction as a platform for setting the scene. The priest wears green vestments which indicate the ordinary time when the miracle occurred. He witnesses with amazement the miracle that takes place in his hands, above the gold-striped altar. Perhaps the words of Jesus will echo in his heart: "my flesh is true food and my blood true drink". The faithful who participate react enthusiastically to the miracle, according to Raphael's language, expressed through movement and emotional participation. The movement of the flame of the candles held by the altar servers is original. These are symbols of the faith that illuminates the path of men.
The two characters above the celebrant's shoulders express the human approach to the mystery and the miracle. They discuss animatedly, one seems doubtful and the other with an outstretched hand, seems to say: "But don't look, you can't see yourself!".
Anachronistic character at the event is Pope Julius II, represented kneeling and leaning on a large cushion in adoration in front of the host dripping drops of blood. The pope's long beard recalls a vow he had made until he expelled foreigners from the Italian peninsula. In the background four cardinals: Leonardo Grosso della Rovere and Raffaele Riario, Tommaso Riario and Agostino Spinola. The charioteers also participate in the mass kneeling in adoration.
The Eucharist is at the center of the scene and almost all eyes are turned to it. Only a child and one of the chairs look towards the viewer. The child is a symbol of pure faith and invites you to believe, to trust Jesus who becomes small and weak, to the point of making himself present in a piece of bread. In fact, the child trusts, believes without difficulty in those who know more than him. Jesus will say: "If you do not convert and become like children you will not enter the Kingdom of Heaven". Those who believe entrust themselves to the love of God as the little ones entrust themselves to the care of their mother. The sediary who addresses the spectator seems to ask: "And you believe it?".
The Incarnation and the Eucharist are expressions of the love of God who gives himself. The sacrifice on the cross and the sacrifice on the table are a single sacrifice, a gift of self that reaches all humanity in time and space. It is the story of a God who always seeks new ways to enter into communion with his children. He seems to hear him: «I created you, I gave you all my love, I guided you, offered my support: where are you, where is your answer, where is your love? What else do I have to do for you? I will not give up, I will continue to try ». Thanks for your attention and see you next time.