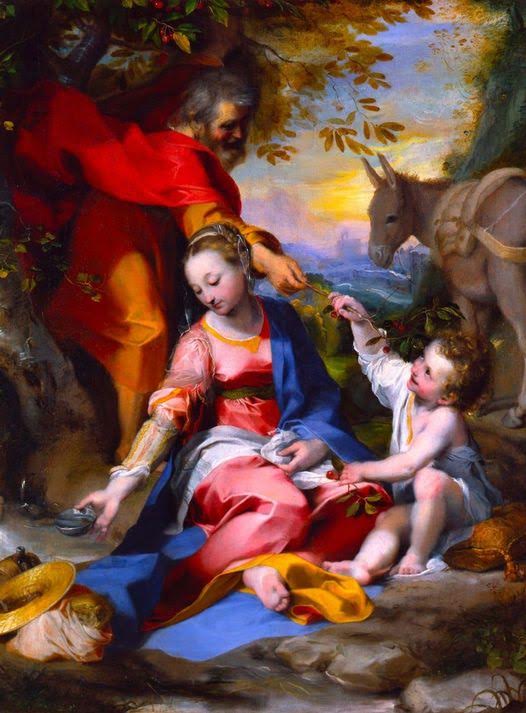 I present to you the work of an artist that I particularly love for the positive charge it transmits. This is Federico Barocci. A precursor of the Baroque, in his works one captures a profound humanity that embellishes the simple daily gesture and the natural expression of his characters. «Rest on the flight into Egypt», today in the Vatican Museums, portrays Saint Joseph offering the Child a sprig with two cherries. For this reason, the work is also called "Madonna of the cherries". The game of glances between Joseph, the Child and Mary is fascinating, as she does not escape the donkey in the background, all intent on looking at the Holy Family. Moreover, the donkey is not only the probable mount of the three fugitives, but it is a symbol that represents us. In the crib it is the image of the pagans who, thanks to Christ, are freed from the burden of sin. Biblical reference is Isaiah who foretells the mission of Jesus: «He took upon himself our sufferings, he took upon himself our pains. He was pierced for our crimes, crushed for our iniquities. The punishment that gives us salvation fell upon him; by his wounds we have been healed ”.
Red, like the passion that Jesus will face and of which the trip to Egypt is a prefiguration, is the mantle of Saint Joseph, red like the fruit he offers. Jesus smiles and, with his arm covered by his shirt, takes the fruit from his father, with the other naked, he hands the cherries to his mother. He is caught in the act of freeing himself from that linen that wraps him, referring to the Shroud cloth that will wrap him after the Passion and which will witness the resurrection. Cherries, due to their heart-like shape and color, are a symbol of Jesus' love and the blood shed on the cross. The cherry, juicy and sweet, is also a reference to the fruit of the tree of Eden that killed Adam but which now, thanks to the Incarnation of Jesus, is transformed into the fruit of life for men.
Mary, graceful and delicate, sitting on the ground, dresses in red and blue, colors of the two natures, human and divine, of the Word. She ideally turns towards us and collects clear water from a stream with a bowl. The gesture alludes to the apocryphal texts that tell of miraculous springs that arose to give the family a drink on the journey to Egypt, but it also refers, precisely in the bowl of water, to Baptism which, as the fruit of Christ's passion (cherries ), saves from sin and death. The pensive face of Mary alludes to what the evangelist Luke writes, who says of the Virgin: "she kept all these things within herself, meditating on them in her heart".
The bread that emerges from the saddlebag near the feet of the Madonna is a Eucharistic symbol and the luminous background, which opens onto an immense landscape, alludes to the humanity for which the future sacrifice of Jesus was consumed.
I told you that I appreciate the art of Barocci because it conveys optimism and hope. In fact, in this work, with a tragic theme, which can be a stampede to escape a tyrant who wants to kill the child, Barocci offers a slice of serenity and joy. The characters warn that the negative happenings in their lives do not depend on mere chance or a dark fate. Someone, even in the discomfort and fatigue of the trial, is guiding them and taking care of them and their needs. There are events in your life that, however terrible they may have been, ended up changing something wrong, correcting attitudes, thoughts and beliefs. They may have spurred important changes and decisions that you would never otherwise have made. Events that have contributed to a better evolution in your life. I would like to suggest to you in a whisper that those events, however bad they did, may not have come on a whim of fate. I like to believe that they contained an important message that needed your deep participation to be understood. Maybe they came for your sake. I understand that it is difficult to apply these beliefs when it comes to major traumas, such as illness, bereavement. While understanding, the undeniable truth remains that getting sick and losing someone we love is inevitable! And it is equally true that if some are not there, it is because they cannot find meaning for those experiences. Others, however, precisely because of those events, experience a profound transformation and often for the first time they discover the best part of themselves and of life. They feel they are better people because they have been able to go through pain and darkness, understanding its meaning and accepting it as part of the human experience. I leave you with an expression of Saint Paul who experienced pain and misunderstanding and despite this he came to say: "I believe that the sufferings of the present moment are not comparable to the future glory that must be revealed in us". Thanks for your attention and see you next time.