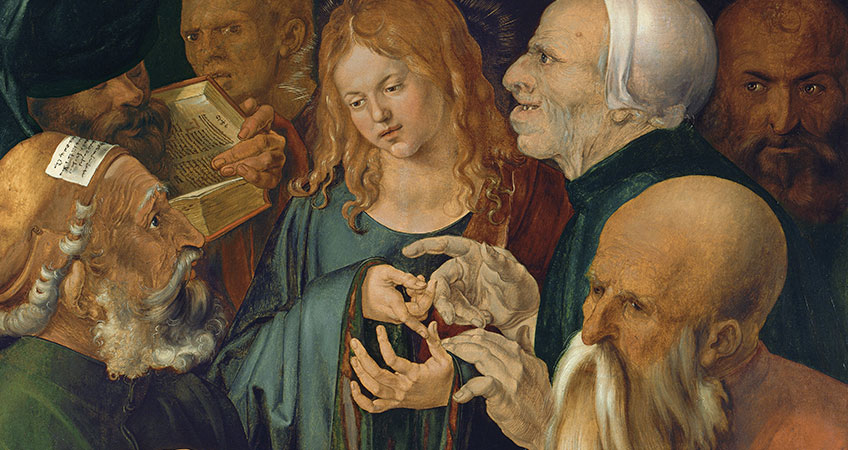 Well found. I present to you Christ among the doctors by Albrecht Durer, kept in the Thyssen-Bornemisza Museum in Madrid.

On the leaflet that comes out of the book below you can see Dürer's monogram and the inscription "1506 Opus Quinque Dierum", that is, done in five days, in 1506.

The work dates back to the artist's second stay in Venice and was performed in record time. The technique used reveals the rapid execution: the artist painted the work in a cast, using a thin layer of paint, spread with large and fluid brushstrokes. Some speculate that the work was donated by the artist to Giovanni Bellini, his admirer of him.

At the age of twelve, Jesus was taken to Jerusalem to celebrate his religious age of majority. Awareness of this passage clearly emerges in the face of Durer's Jesus.

The characters occupy the whole scene surrounding the young Jesus without leaving anything but a few small spaces for the dark background. There is a contrast between beauty and ugliness, innocence and corruption.

The artist portrays ways of placing oneself before the scandalous Truth of Jesus. Six doctors dispute the truths of religion in the Temple of Jerusalem. They stand out floating, without precise spatial references, note the crossing of the hands in the center. Jesus has a sad and somewhat absent face, as if he did not listen, an omen of the destiny that awaits him. The faces of the other characters are more original, old wise men, a veritable gallery of faces, sometimes tinged with malignant spite or inquisitive attitudes. The character to the right of Jesus, all full of himself, is a real caricature, it takes up the studies of Leonardo da Vinci, whom Dürer perhaps knew. The doctor with the turban pulled down over his eyes is lazily immersed in the reading of the Bible and does not notice the surprising novelty of that child who stands before him. His relationship with God is limited to his religiosity that distances him from the authentic relationship with God that inevitably passes from the relationship with others. John in the First letter of him states: «If anyone says: 'I love God' and hates him as his brother, he is a liar. Indeed, whoever does not love his brother whom he sees cannot love God whom he does not see. And this is the commandment we have from him: whoever loves God must also love his brother ».

The man in the lower left has attached a tag with verses in Hebrew to his cap, as the Pharisees did. He seems to be the most open to Jesus. He has closed the heavy book of law and tradition, he escapes the debate and is available to listen to the newness of this child.

The center of the painting is occupied by the whirlwind of hands. The sure gesture of Jesus' calculation contrasts with the awkward movement of the fingers of the most monstrous character who almost touch, as in a challenge, those of Jesus.

Seven faces are represented, but the only one that attracts the viewer's gaze is that of Jesus, thus alluding to a psalm that reads: "Seek his face; your face Lord, I seek ». Beauty is concentrated in Jesus who lets the beauty of human life shine through as God had dreamed of it. Another psalm says: "You are the most beautiful among the children of men." Jesus wishes to heal the wounded beauty of every life he encounters, lives often marked by sickness, sin, rejection. In John's Gospel, Jesus reveals himself as a "beautiful shepherd". The beauty of him lies in the love he puts into taking care of his sheep. You can experience the beauty of him by letting yourself be loved by him, sincerely opening your heart to him. The beauty of Jesus teaches how to live! It is difficult to live, sometimes it is a great effort. So I advise you to open up to trust in those who love you for who you are. Live letting yourself be loved. So you have the opportunity to transform your existence into a "beautiful" life. Thanks for your attention.