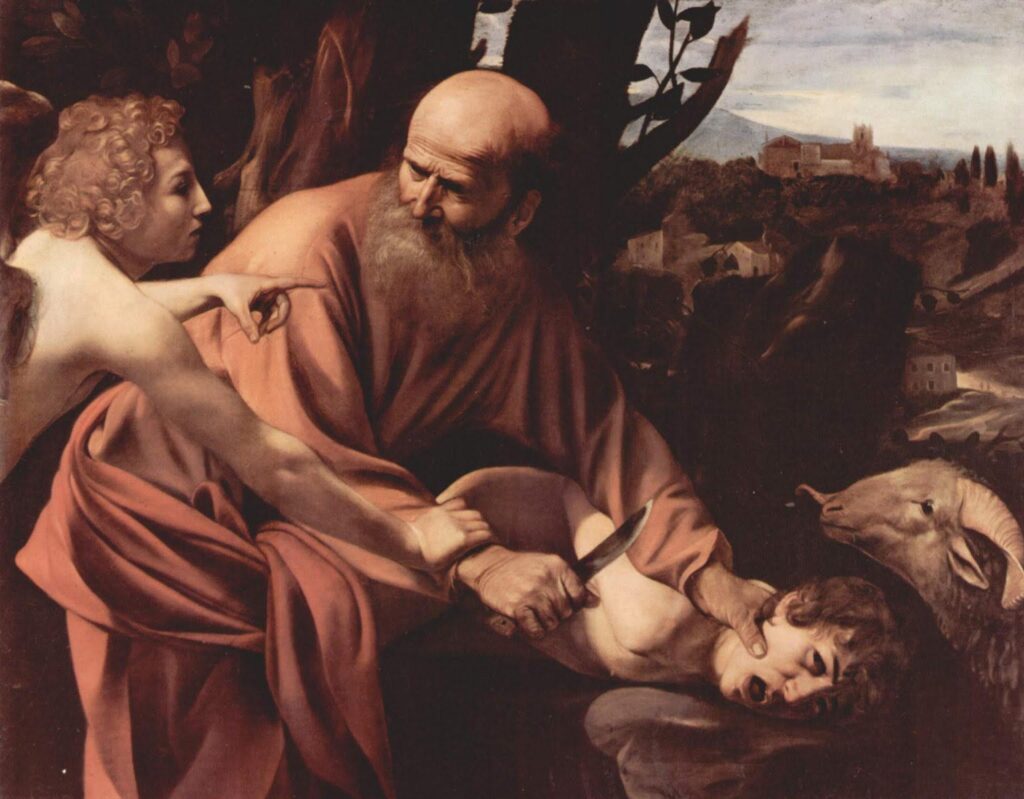 Welcome. I am pleased to present you an extraordinary work. "Sacrifice of Isaac" by Caravaggio, now kept in the Uffizi in Florence.

But first some brief information about the author. Michelangelo Merisi, from the place of birth takes its name, Caravaggio in fact. In Simone Peterzano's workshop he learns to paint from life, the love for nature and the study of the effects of light that will become his characteristics. In Rome he works in the workshop of the Cavalier d 'Arpino and brings a revolutionary breath. In his paintings the heroes of sacred history have the faces of men and women in the street, tired, wounded by life. The Roman experience ends in 1606, during a brawl, Caravaggio kills a man and is forced to flee. In these difficult years even his style becomes more dramatic, the clash between darkness and light is accentuated, colors and shadows become darker.

To carry out the "Sacrifice of Isaac" he draws inspiration from chapter 22 of the book of Genesis. A scandalous page of the Bible because obedience to God is so radical, going beyond any moral principle. The episode concerns the patriarch Abraham who sees God's promise of a son fulfilled by his wife Sarah, after having waited for it for a long time. Abraham looks at this son, enjoying fatherhood. He can say to himself: "God is faithful, his promise is very concrete". In this idyllic atmosphere the same voice of God calls Abraham again with a cruel telegram: "Take your son, the only one you love, and give him to me as a holocaust". God messes up all ideas, puts a device in the life of Abraham who, albeit with so many uncertainties, went ahead with a heroic faith, and created an earthquake. God speaks with cruelty: he does not say "take Isaac" but "take the only child, the one you love". He asks him for the son of the promise, the son he gave him. He is undoing what he did. All this is hard, absurd. Abraham does everything slowly, as if to buy time. He leaves, arrives in the territory of Moria, stops the donkey and the servants and continues alone with Isaac. Climbing the mountain, the son asks "Where is the lamb for the holocaust?". «My father, my son» are the words that the two protagonists exchange, a further “stab” in the heart of the old father. Arriving on the mountain, the engineer Abraham builds the most difficult altar in his life, the one in which to sacrifice his son. All in silence, no one speaks, because there are no words. He ties the boy to the altar and stretches out his hand to sacrifice him, but "The angel of the Lord called him from heaven and said to him:" Abraham, Abraham ". He replied: "Here I am." The angel said: "Don't stretch your hand against the boy and don't do anything to him! Now I know that you fear God and you have not refused me your son, your only son ”. Abraham saw a ram entangled with its horns in a bush and offered it as a burnt offering instead of his son ”.

In the center dominates the figure of Abraham, old, bald, bearded and strong. He wears a blood-red cloth over an ocher robe. The gnarled hand blocks the head of the son he lays on the altar and in his right hand he holds the knife. He has dirty nails, a man who has lived and is used to fatigue.

Behind him a laurel tree, emblem of the Barberini family, of which Maffeo, who commissioned the work, was a member. Laurel is a symbol of glory and immortality. The tree, on the other hand, alludes to the wood of the cross.

On Isaac's face an extraordinary grimace of pain, a scream of youth that is about to be violated. He has his head resting on a stone, a symbol of the altar and therefore of Jesus' sacrifice. His mouth is open, his teeth, tongue and the black bottom of his throat can be seen. As for the "Boy bitten by a green lizard", Caravaggio shows his attention to the emotions and expressions on his face. He is affected by the Lombard training and Leonardo's studies on physiognomy.

To act as a model for Isaac, was the boy Cecco Boneri, who will also become a painter and will pose for other works. Abraham's questioning face is turned to the left, where suddenly an angel appears, with the features of an adolescent, who with his right hand, firm and decisive, grabs the arm of the patriarch, preventing him from sinking the dagger into the boy's neck.

Abraham's face expresses awareness of what God asked him, he continued to trust despite the pain. The angel points out to Abraham the ram to offer in place of Isaac. The latter acts as a scapegoat, becomes a prefiguration of the Passion of the Lamb of God, Christ, who offers himself to death in place of man, to save him. In fact, the angel performs the typical iconographic gesture of the Baptist when he points to Jesus, "Behold the Lamb of God, who takes away the sin of the world!"

The light hits the young angel's body diagonally and reverberates in Isaac. Always the light highlights the blade of the knife. Thus the artist highlights Abraham's obedience. He does not hesitate to offer his only son to God. The face of the patriarch is also penetrated by divine light, perhaps because he continues to hope in that God who has asked him for something absurd. The letter to the Hebrews reveals his possible thoughts: «By faith Abraham, put to the test, offered Isaac. In fact, he thought that God is capable of raising even from the dead: this is why he got him back ».

The light makes the silhouettes of the trees emerge from the shadows and flees far to the horizon, where you can see trees and houses, while the dark clouds thin out. The work, together with the "Rest on the Flight into Egypt", is the only one by Caravaggio with a landscape in the background. Here perhaps it is a glimpse of the Roman countryside. It is one of the first works of the artist's stay in Rome. Later he will plunge his stories more and more into darkness.

In oriental cultures the terrible practice of the sacrifice of the firstborn son was widespread, the apex of the religious ritual. Now, the people of Israel have overcome this practice thanks to a revelatory intervention from God. The climax of the story is just when God intervenes to forbid the sacrifice.

In every age, marked by insecurities, faith still gives certainty to life. Abraham is the man who obeys the voice of God and, in this way, he is transformed: ascended to the mountain as the father of Isaac, he descends as the father of believers. An example of absolute faith in God who rewarded him with numerous descendants "like the stars in the sky and like the sand that is on the shore of the sea".