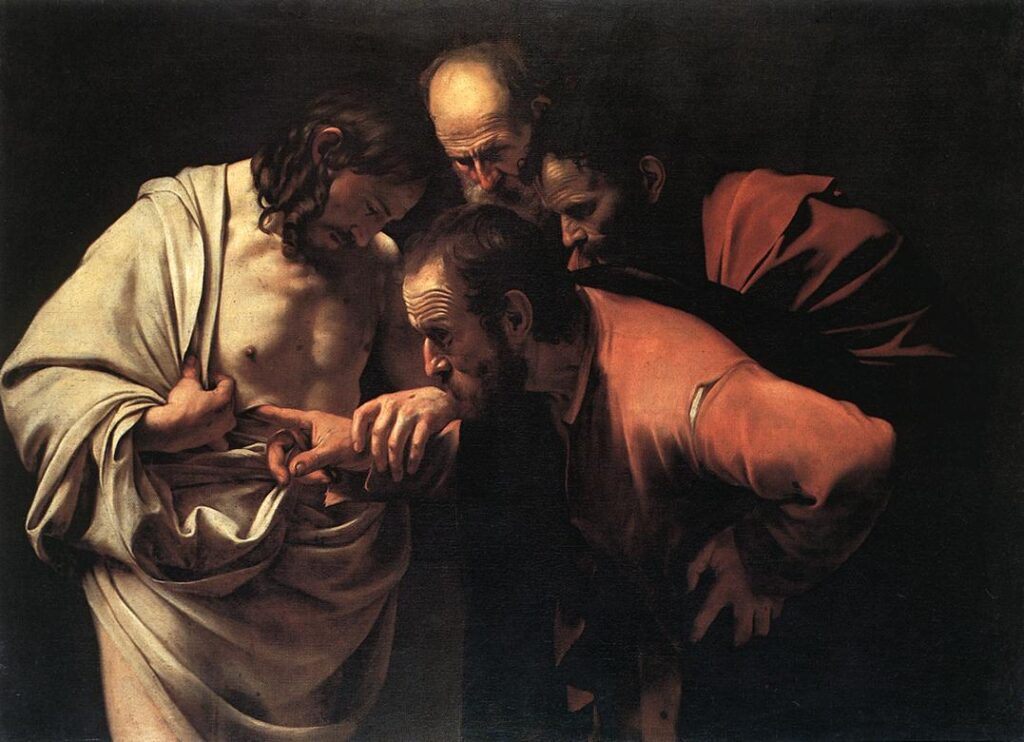 Today I present to you The incredulity of San Tommaso del Caravaggio. Important work for understanding Merisi's conception of art, well reflected in the troubled personality and in search of the apostle Thomas. Lights and shadows coexist together within the same canvas. This is his life, this is our life.

The role of investigating and shaping everything - gestures, movements, physiognomies, attitudes - is entrusted to the chiaroscuro and color contrasts, underlining the drama of the scene. Caravaggio does not use preparatory drawings, he paints from life, taking as a model people chosen from among the people. Nature is a privileged source of experience and inspiration. It subverts traditional iconography. There is no idealization of sacred figures but a realistic and dramatic vision. The attention to detail, typical of genre painting, is overcome to focus on the Gospel message, without rhetorical and ornamental elements.

The Gospel of John informs that Thomas was not present when Jesus appeared to the apostles, and to the account of the latter, who confidently assert: "we have seen the Lord", he raises his doubts and affirms, "if I do not put my finger on place some nails and do not put my hand in his side, I will not believe ». He is a rationalist, he doesn't even trust what he may possibly see, he pretends to touch.

"Eight days later the disciples were back in the house and Thomas was with them too. Jesus came behind closed doors and stopped among them ». Here is the scene represented by Caravaggio. Thomas, the unbeliever faces Jesus. "Put your finger here, stretch out your hand, and put it in my side; and no longer be incredulous but a believer ». The moment of observation is photographed with four figures on a dark background. The light focuses attention on Thomas's frowning forehead and on the profile and side of Christ, dazzling with light, already transfigured by the resurrection. The shot also allows you to fix your attention on the fearful and doubtful expression of Thomas with his head down, comforted by Christ with his head up.

The close arrangement of the four heads draws a cross and the eyes a triangle with the vertex on the gesture of Thomas. An expedient that focuses the attention even more intensely on the fulcrum of the scene: the real presence in the flesh of Jesus. An invitation by the painter to experience the presence of God in the concreteness of history, with its contradictions and efforts. You meet God in everyday life, he makes himself present even where you find it hard to see him.

Thomas introduces his finger into the wound in Jesus' side. Two other apostles look curiously, Peter and behind the other two, in a higher position. Wonderful interlocking of human forms. The benevolent hand of Jesus accompanies that of the apostle. All exalted by the light that comes from the left: it is the light of God that meets man, his needs for meaning and illuminates his doubt. Look at the frowning foreheads of the apostles!

The painting was an "over door", so the spectators saw it from below, participating, emotionally, in the discovery of Thomas.

Jesus moves his cloak and lowering his head, he introduces Thomas's trembling finger into his side, wounded by the soldier's spear. From which the evangelist John had seen blood and water flow. Symbols of life given for the love and salvation of man.

The face of Jesus has an imperceptible grimace of pain. The life of the apostle, the life of every man, your life is close to his heart to the point of accepting the sacrifice for their happiness. There is nothing else in this painting, everything is shrouded in half-light.

Thomas's attitude, skeptical and conditional, is similar to ours. Caravaggio paints this disturbance in Thomas and wisely transposes it also in that of the other two apostles. It seems that the purpose of the painting is not a simple narration of the facts, but rather to confront us with the mystery of the resurrection in its evident corporeality.

The apostles look like outcasts, incredibly human: disheveled, beard unkempt, clothes torn, even a tear is evident in the foreground; they have the bony, wrinkled face of people dedicated to work and fatigue. Thomas's hand is certainly not that of a refined man. He sinks into the flesh of Jesus, with dirty nails from daily work. We would have expected an invitation to wash your hands first and then put it in your side. But no. Jesus does not fear infections, he welcomes us, welcomes you as you are, with your filth, the contradictions and the wounds that you carry deep in your heart. It is the dirty hand of all those who are called to trust in Jesus, despite their sin. With an astonishing physicality Thomas sticks his finger well into the wound in his side, so much so that Jesus almost seems to want to keep his hand from a further thrust that could prove painful. The truth must be sought, investigated, deepened. Here is that finger that seems to want to dig into the flesh of Jesus.

Skepticism melts into amazement; the eyes widen in front of those wounds and the mouth, trembling, opens stammering, with a faint voice: "My Lord and my God!".

In the existential journey of every day you can adopt Thomas as a companion. Perhaps you too, like him, do not immediately fall on your knees, you do not trust, you resist, you are tormented by doubts and fatigue.

Precisely through this tormented journey Thomas, awaited, stimulated by the loving patience of God, finally discovers the right attitude and finds the simplest words to say the greatest thing: "My Lord and my God".

He has come last, compared to the other apostles, but in the end he has come anyway. Jesus welcomes the latecomers, indeed for them he is ready to grant some overtime that had not been requested of him for the others. He welcomes the least, those who doubt, stagger in their difficulties and uncertainties and advance in the midst of darkness. He is used to giving himself to the latest arrival: the thief, on the cross, nor is it tangible proof.

Before believing as Thomas did, it is necessary to have suffered for not having been able to believe. More than to the one who considers himself right, Jesus gives himself to the one who recognizes his mistakes, without the absurd pretense of wanting to justify them. Thomas approached Jesus fearlessly, empty-handed, but he carried the burn of many disappointments in his heart. Jesus said to Thomas and continues to say to you too: "Blessed are those who, despite not having seen, will believe". He just asks you to be able to not see, at least for a while. You will have all eternity available to see him and contemplate his love for him. Now he asks you for the greatest gift you can give him: trust him. It doesn't matter if you arrive late, the important thing is that you arrive. Faith sees beyond, sees the invisible. In the end Thomas gives up not so much because he touched but because he let himself be touched, he let himself be enveloped by the presence of the risen Jesus.