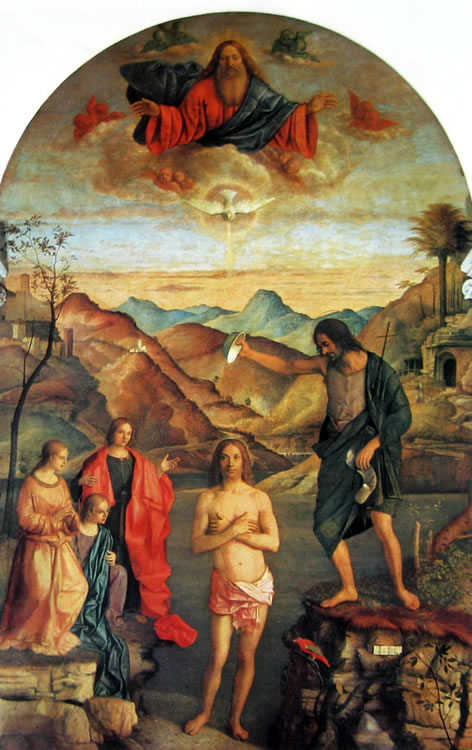 Today I am very happy to present to you the "Baptism of Christ" by Giovanni Bellini, a brilliant and prolific artist. His signature is in a cartouche on the rock below. The work of around 1501 is located in its original context, the church of Santa Corona in Vicenza.

Giovanni Bellini, also known as Giambellino, was born in Venice around 1430. Among the greatest exponents of the Renaissance, he will exert a great influence on Venetian painters. With him the “Venetian tonalism” was born, a degradation of the chromatic ranges that gives an idea of ​​depth. Brother-in-law of Mantegna, he was influenced by him in his youth. Characteristics of him are marked sensitivity towards the landscape, sweetness and emotional expressiveness of his figures.

Bellini recounts the episode of the "Baptism of Jesus" in the Jordan River, with extreme richness. To welcome us above is the Father with open arms who sends the Holy Spirit in the form of a dove, surrounded by cherubs and seraphs. He has the same garments as Jesus, currently supported by the angels on the left. An expedient to emphasize the identical divine nature of the two people. «Whoever has seen me has seen the Father» Jesus will say.

The landscape is not just a compositional background but helps the observer in reflection. For the first time in the history of art, everything is melted by atmospheric light. On the large and restful background, two castles appear on the left, a small parish church, to the right and, behind San Giovanni, a hermitage with an anchorite. The hermitage at the top right symbolizes the Old Testament; on the left, however, the castle the New Testament. The landscape also refers to the motivations of the client, Battista Graziani, who wanted it for the family chapel erected in honor of John the Baptist, following the vow made before leaving for a pilgrimage to the Holy Land. The landscape would remind us of the holy places.

The main scene follows a traditional Byzantine iconographic scheme. Christ in the center, aligned with the Father and the Holy Spirit. «The Spirit like dove descended on him. And a voice came from heaven: “you are my beloved child, in you I am well pleased” ». The perfect verticality, along the central line, alludes to the unity between the three divine persons. Baptism in fact manifests the Trinity. This is also emphasized by the presence of botanical symbols, such as the clover, in the lawn at the foot of the Baptist and which, thanks to its characteristic structure, is traditionally used as an image of the Trinity.

The angels on the left are not mentioned in the gospels. Their presence dates back to the liturgy, where a deacon assisted the bishop, holding the chrism and dressing the catechumens with the white robe. In fact, the three figures hold up the garments of Jesus. Christ's loincloth is extraordinary, it should be white and instead is streaked with a purple color, a reflection of the red and blue garments in the waters of the Jordan. The three angels also recall the theological virtues, faith, hope and charity, and once again refer to the Trinity. The central one is kneeling, underlining the humility of the second person of the Trinity, of Jesus, who in the incarnation took the mortal nature, that is, he lowered himself, as Paul recalls. 'to be like God, but emptied himself by assuming the condition of a servant, becoming like men. He humiliated himself by making himself obedient to death and death by cross ». To reinforce this meaning of humility, Jesus, although central, is lower than the Baptist. The latter in addition to supporting the bowl with which he pours water on Jesus' head and recognizable by its traditional attributes, such as the cross and the scroll with the inscription "Ecce agnus Dei", when John saw Jesus pass by and pointed to him exclaiming : "Behold the Lamb of God, the one who takes away the sins of the world." The palm, characteristic of the desert, is a symbol of martyrdom. He is behind the Baptist because he will die for not having compromised with his conscience and for having denounced the adultery of King Herod.

The painting invites reflection on the reality of baptism. With it, man joins the death of Jesus in the promise of the resurrection. The old man dies and the emergence from the water indicates the resurrection. An invitation then to a fulfilled, happy life, because it was redeemed, freed by Jesus. To emphasize the aspect of new life, Bellini introduces an unusual detail to the foreground, a parrot, with a red body and gray-green wings. In ancient Greece it was thought that the parrot was able to say "kaire", a word with a guttural sound that can resemble the cry of an animal. This legend passes into the Latin tradition, which translates as "ave", so that it was believed that the bird was able to say the word of greeting intended for the emperor but also the greeting of the archangel Gabriel to Mary, in the Annunciation. Here the parrot emphasizes the eloquence of the Baptist who recognizes the Messiah and indicates him as the "Lamb of God".

The episode of Baptism ends with the voice of the Father: "You are my beloved son, in you I am pleased". Every man is "son in the son" as Saint Paul recalls. That powerful voice from heaven then made itself heard for you too. You are loved by God, you are the beloved son! Bellini's wonderful Christ nails you with his gaze and seems to remind you of this fundamental truth: "you are loved, do not be afraid, do not fear if others judge you, if your heart judges you, if you have low self-esteem, for you I I sacrificed myself and gave my life! " I conclude with the prophet Isaiah who writes in the name of God: "You are precious in my eyes, because you are worthy of esteem and I love you, I give men in your place and nations in exchange for your life".

Thanks for your attention and goodbye.