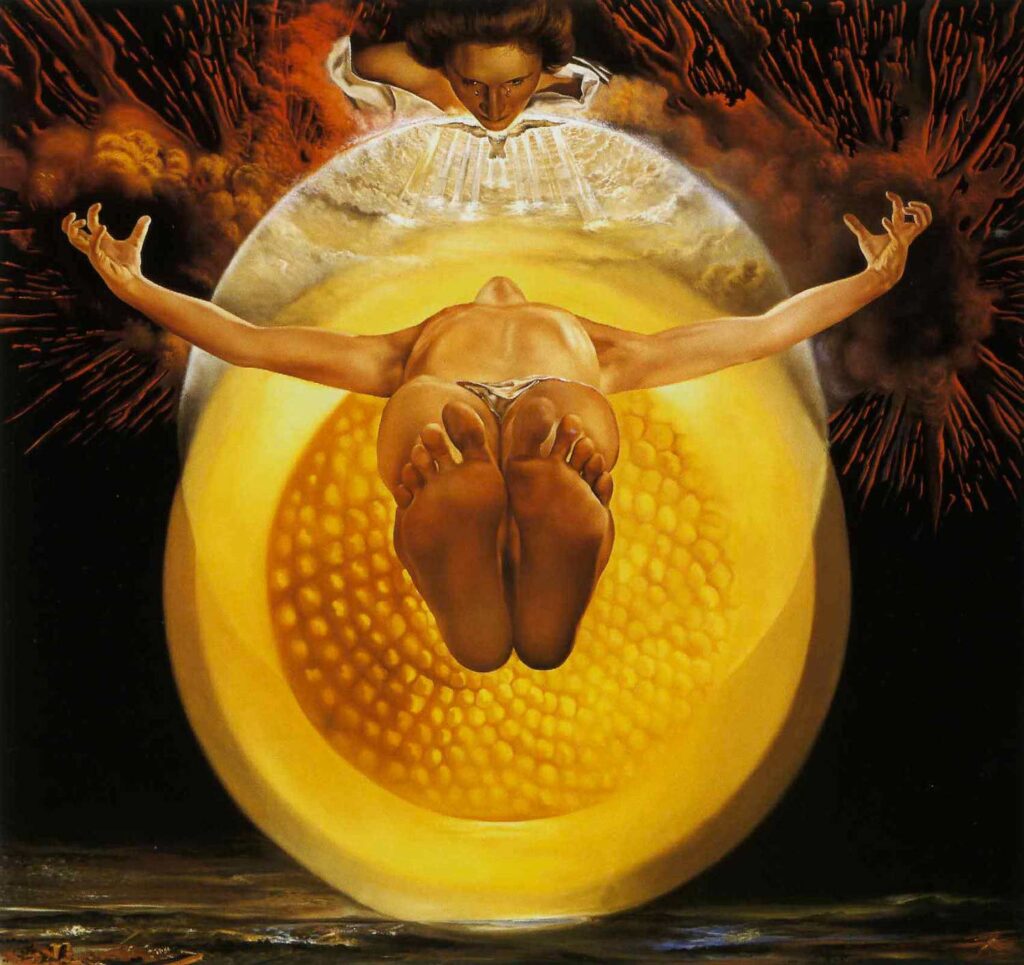 Today I present to you the "Ascension" of the Spanish histrionic painter, Salvador Dalì. The artist immerses the event in a globe of yellow light, a luminous sunflower. Flower, not very present in religious iconography, unknown until the discovery of America, from which it was imported into Europe. Due to its continual turning to the sun it has become a symbol of dedication and fidelity.

In an astonishing three-dimensional perspective, Christ ascends to heaven, sucked into the globe of light. His face disappears behind the evidence of his feet. Mantegna's lesson is evident. Jesus keeps the shape of the cross, his hands betray the spasm of suffering. In reality, the nails are no longer there but Jesus seems to want to remain in that position that expresses sacrifice, his dedication to man. Paul in one of his letters affirms that the Son of God: “emptied himself, assuming the condition of a servant and becoming like men; appeared in human form, he humiliated himself by making himself obedient to death on the cross ». A sacrifice therefore accepted for love, for a noble purpose: to give one's life.

Welcoming Christ in his triumph is a bright, grainy sun, similar to the ripe achenes of the sunflower. Due to its turning to the sun, assuming almost the same characteristics (in color and in the corolla), it is a symbol of adoration and a sign of divinity itself. For Dalì it is a sign of the Father who, with the Spirit, in the form of a dove, welcomes the Savior at the end of his mission on earth. Before ascending to heaven, Jesus turning to the apostles says: "I am with you always until the end of the world". Powerful phrase on which to build our optimism. You are not alone! We are not alone. Yet how many people complain on a daily basis. People unhappy with what is wrong with their life, in the world. Reality offers many opportunities to complain. However, if you reflect, complaining does not change things and especially after complaining you feel worse than before. The attitude to complain is rooted in the period of the beginning of our life. In fact, as children, the only way to get our needs satisfied was crying. The baby cries to get what he needs. We carry this survival instinct even in adulthood. The crying, however, turns into words and we begin to express everything that we do not like, disturbs us or makes us suffer, convinced that, as in the past, with crying, help will come. However, this mechanism does not always work, when we grow up it is difficult to find figures who look after us and are always ready to intervene. How to do it then? First, it is important to be aware of this infantile mechanism. Then stop and ask yourself if complaining will make you better. You can also decide to avoid people who complain and infect you with their negativity. Then take action before negative words and thoughts invade your mind, if you can do something to resolve that situation, do it. Finally, think of yourself as a positive, loved person, possessing talents that others do not have, able to take control of their own destiny. Nelson Mandela, during the difficult years of his imprisonment, wrote thus: “No matter how tight the door is, how full of punishments is life. I am the master of my destiny: I am the captain of my soul ». Clearly it is not easy, often the context or even the burdens you carry inside make this process difficult. It is therefore necessary to feed on positivity. There is enough to be happy. It's up to you to let it enter your heart. Stop in the evening and think about the things you have received during the day. Write at least three positive things to be thankful for. If you actually start you will realize that there are many others. This exercise is to be done even on the most terrible days. Even in tragic moments there is something good, even if hidden. Fill yourself with positive thoughts and don't get drenched in murmuring! If you have a chance, listen to a song by Fiorella Mannoia, May it be blessed. I'm sure it will help you!

Luminous iglobes that intersect and interpenetrate refer to the atom, in this case the symbol of the risen Jesus, the beginning and end of the renewed reality. Dalì he was shaken by the explosion of the atomic bomb and it was precisely from that event that he approached the faith. Many religious works by the artist date back to 1950. Christ ascends to heaven with almost the same cosmic dynamism as the Hiroshima bomb, a positive and non-destructive dynamism. In fact, Jesus goes up to heaven and prepares a place for those who want to accept his love for him, "I am going to prepare a place for you, then I will return to take you with me, so that where I am you may also be".

At the peak of the ascent, waiting for the Savior, there is not the face of the Father, but that of Gala, the artist's wife and his inspiring muse, capable of bringing him closer to eternal realities. As in the ancient depictions of the Ascension, the Madonna was the fulcrum around which the Church gathered, dismayed by the absence of the Master, so Dalì portrays the Virgin Mary with the face of Gala.

The sunflower, which envelops everything with its light, is a sign of the affectionate embrace of the Father to whom we are admitted through Christ, who with the Ascension opened the way to Heaven. Humanity enters in an unprecedented and new way into God, into his friendship. The Ascension reveals the future that God has reserved for his children: the one reached by Jesus with his resurrection. Again Paul writes to the Corinthians: «Let us not fix our gaze on visible things, but on invisible ones. Visible things are of a moment, invisible ones are eternal ". Thanks for your attention.